We recently spent a weekend in Portland, which I have to clarify by adding “Maine”, because we did not, I repeat we did not, go to Oregon. The gift shops in Portland know all too well that if you tell someone you went to “Portland” they automatically assume the one in Oregon. Every fridge magnet, key ring, and dish towel in all of the gift shops list both city and state. People say “Portland Maine” in one breath too, like it’s part of the name. Here are some transcribed conversations people said to us.

“It’s sunny here in PortlandMaine.” — a random person on the street stating the obvious.

“You’ve got to have a lobster roll when in PrtlndMane.” — someone in a restaurant.

“You’re here at a bad time. Summer is a much nicer time to visit PortMan.” — someone in the ferry terminal.

“I swear if you say we’re in Oregon one more time, I’m gonna gouge your eyes out with a lobster fork. We are in PORTLAND, MAINE.” — my girlfriend.

Okay, that last one was a bad example.

We stayed close to the Arts district, which translated into Portland-speak means a ten-minute walk to the Fire Engine Museum, which itself was described worryingly by a local tour operator as “riveting, insightful, and Portland’s only must-see attraction”.

Skipping on that museum, we went to a tourist office looking for inspiration. We browsed one of those wooden racks of brochures, getting excited by whale-watching trips, ferry routes to various tranquil-sounding islands in the bay, or paddling somewhere in a canoe. We were debating which sounded most appealing, when we noticed all of the brochures mentioned “June-September”. PortlandMaine in winter might as well be Siberia for all the tourists it caters to.

On our first afternoon and evening we wandered around, periodically stopping for a hot drink or potato donut or clam chowder, stopped by cute deserted stores selling paintings and pottery, and generally explored the heart of the city. Then we stopped by a bar for mimosas, discounted for happy hour, although they might as well call it “happy winter” for all the good it would do attracting customers. 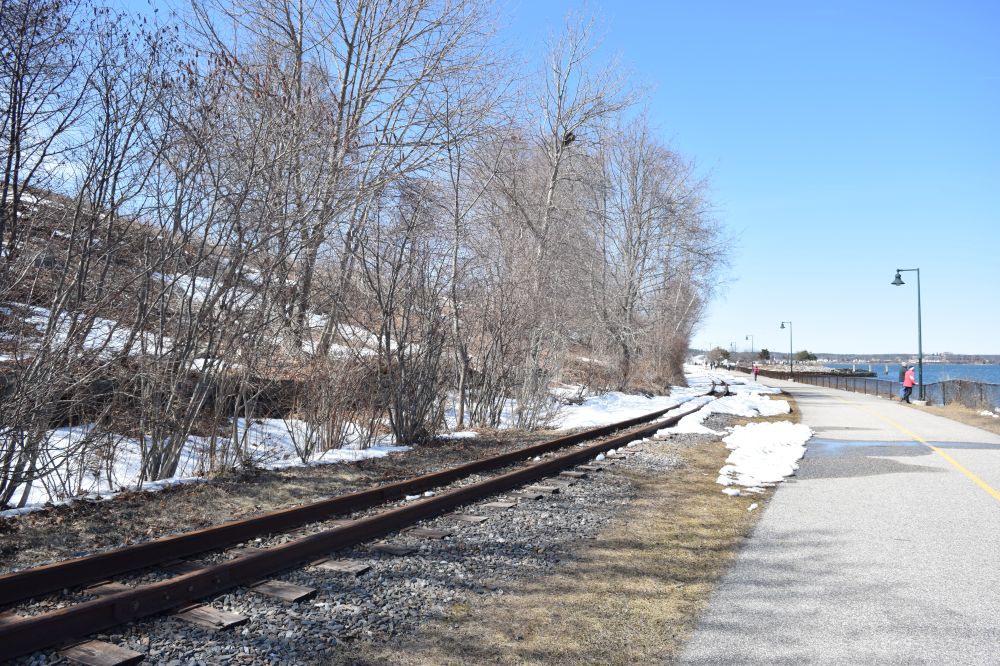 This was the Eastern Promenade, which boasts a cute train running its length (out of action for the winter, obviously). Instead, we walked first along the shoreline, sand between our toes, dogs scampering between our legs. When we hit a dead end, we climbed up some rocks back onto the path, which we followed back towards downtown, nodding greetings to dog-walkers and runners. The sun stayed bright above us, hats and gloves stayed in our pockets, and we stayed pleased with our decision to come to Portland. 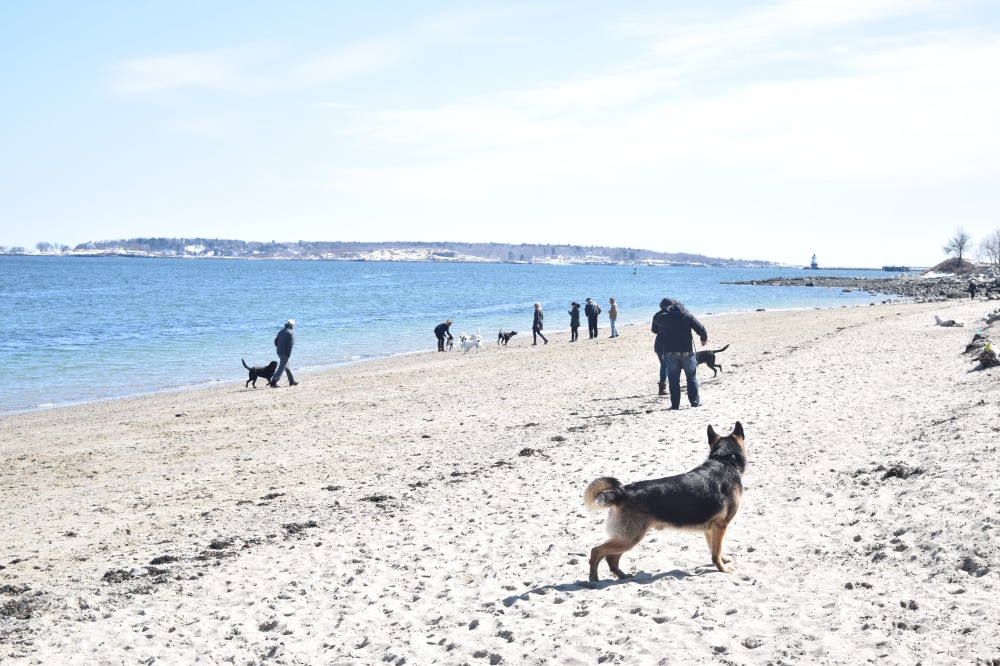 In the afternoon, we headed to a ferry terminal to see where we might go if we were to come back three months later. Miraculously, there was sporadic ferry service to places called things like Peak Island, Diamond Cove, Little Diamond Island, and Great Diamond Island. I guess they like diamonds in PortlandMaine.

We bought a ticket to Peak Island (keep your bloody diamonds, thank you very much) and sat down in the waiting room. We contemplated sitting in a café on Peak Island overlooking the bay sipping at steaming hot chocolates. Then we contemplated the likelihood of said café being open and promptly headed across the street to Standard Baking Co. to stock up on snacks in case there was nothing open on Peak Island.

The ferry was surprisingly busy, by which I mean there was about 10 other passengers, 2 of whom were big fluffy dogs. When we disembarked at Peak Island, most people vanished, who knows where. A group of three started walking in one direction while we checked the signpost pointing variously to a community center, a seafront restaurant, a school, an inn, and a bike rental place. By the time we’d finished examining the signpost, the group of three returned. They asked us if anything was open around here. We again examined the signpost, to see if this signpost, unique to all others in the world, listed opening hours in the fine print. Alas, no.

And indeed nothing was open, but the island was very pretty. 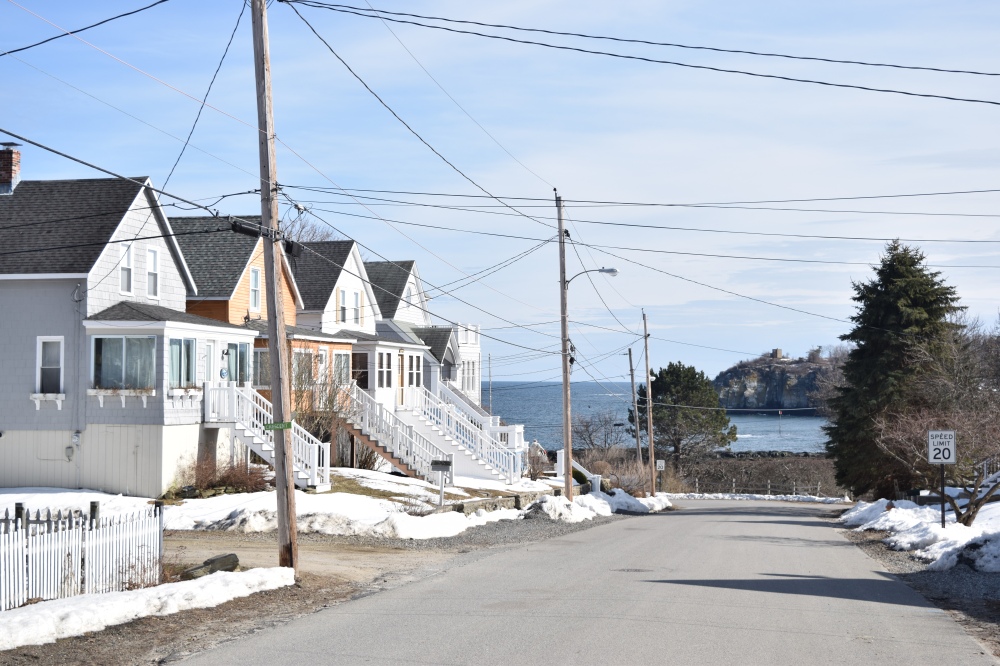 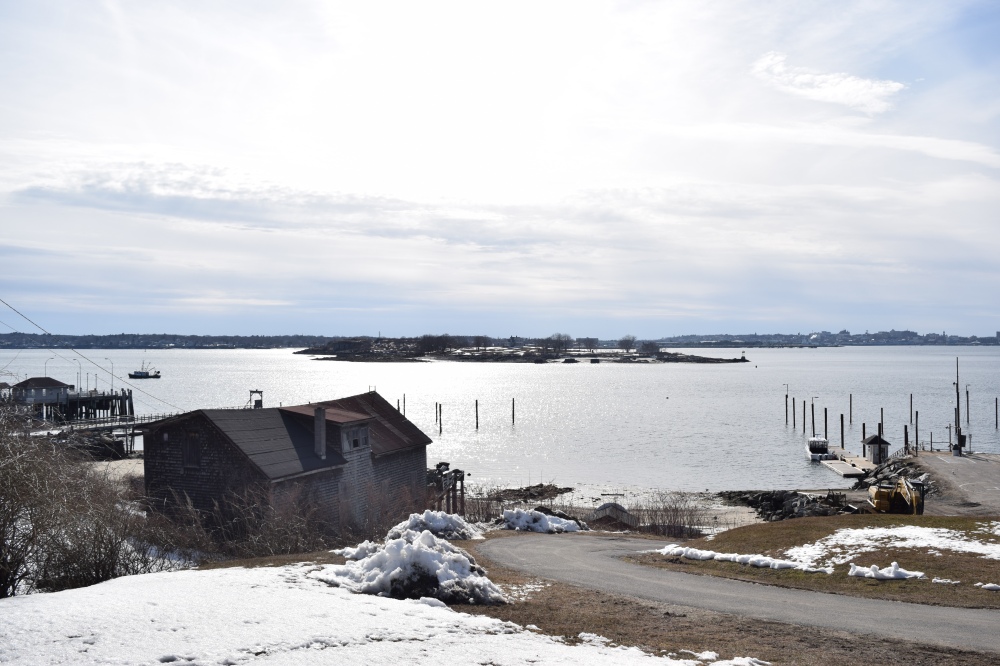 To end this post, here’s a random picture of two people doing something weird: