If I get a ticket from place A to place B from a bus station, I expect the entirety of that journey to be made by bus. So when I bought a bus ticket in Peru from Puno to Cusco, I was expecting to heave my rucksack onto a bus, then curl up in my hoodie, press against the window, and go to sleep. It could be a shiny new bus or a rusted piece of junk that didn’t look like it’d make it out of the station let alone survive a 15-hour journey, but I invariably expect a bus. I think that’s natural. I think most people would expect the same.

And it was a bus, at least to begin with. But then it became the back of a jeep, a cross-field hike, then a ride on the back of a bicycle…then another bus. Let me explain.

Firstly, here’s part one – the journey from La Paz to Puno – if you want to catch up. No pressure.

Secondly, during the time I was in Bolivia and Peru, a lot of locals were upset about a lot of different things — low wages, poor infrastructure, the annoying number of backpackers with lame WordPress blogs, among other things — and apparently while us westerners write letters or sign online petitions, Peruvians like to set fire to tyres and put big-ass boulders in the middle of roads. Basically, when Peruvians are pissed off, they make people take notice.

And in my experience of this, the police don’t really care. Maybe they’re involved in the strikes themselves, I don’t know. So when my bus came to a stop some way outside Cusco at the top of a hill, it came as no surprise to me that there was about 50 local people in the road in front of us, standing around a smouldering tyre. Some of them had picket signs which I couldn’t translate but they included exclamation marks so they seemed serious.

After almost an hour of rumours and gossip spreading around the bus, a self-appointed leader of our ragtag bunch of travellers decided he was going to start walking (apparently the next town was “about 10km” away) and invited the rest of us to join him. Everyone did except the Peruvians on our bus who presumably just joined the blockade.

I walked with the Israeli girl called Jacqui that I’d been sitting next to on the bus. She was as enthusiastic about an adventure as I was and we both had rucksacks rather than suitcases so us and a few others led the way.

When we’d navigated past the flaming tyres and angry locals (who had no beef with us and wished us well), it was actually a beautiful place — there were bumpy hills on all sides, a still blue lake on our left and a winding empty road ahead of us. After a mile or so, there were no more huge boulders and a few hardy car Jeep owners who were having fun swerving around the smaller ones. One particular driver stopped and let four of us hitch a ride on the back. 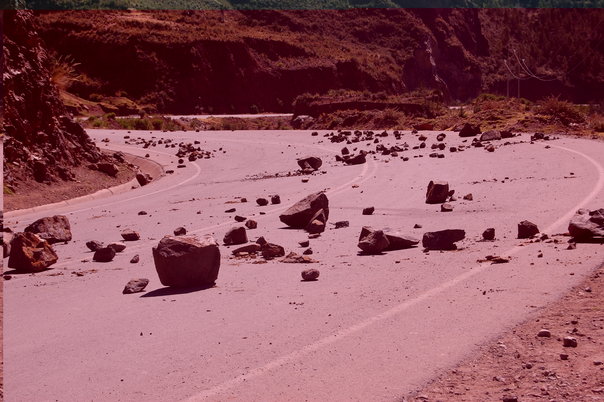 After an hour of that, which was exhilarating and cool and felt like we were actually making progress, our driver told us he could take us no further — there were more huge boulders ahead, according to the Quechuan among us who could speak a little Spanish (surprisingly little, given he lived in Peru).

We’d been dropped outside a tiny store that was nothing more than a big shed with a metal grate on the front, so we grabbed some snacks and water and followed our Quechuan guide across some fields. He seemed to know where he was going and we didn’t have any better ideas. Maybe he’d take us to his family and we’d all be adopted and would live happy, rural lives in the Andes.

“If we get free alpaca clothes, I’m up for that,” said Jacqui to nobody in particular.

Carrying all your belongings on your back is useful for adaptability and speed when you’re in the middle of a cross-country hike in a strange country with no map or compass or anything practical, but it sure is uncomfortable and hot. I kept stopping to readjust myself and take a breather. “Come on lazy Englishman,” said Jacqui, this time specifically to me.

At the next major road – sorry, just road – we found some kids on BMX’s. They volunteered to give us a bunk for a little while.

“What about our rucksacks?” We queried.

And in a show of resourcefulness that impressed me, one of them sprinted off somewhere and came back 20 minutes later with another friend and a small cart they pulled along on the back of a third BMX. Then Jacqui and I jumped on the back of two Peruvian kids’ bikes and got a ride for a mile or so. Our rucksacks could easily have been cycled in a different direction and all our stuff sold on the black market but thankfully that didn’t happen. We gave the kids 50 centimos and headed onwards.

It was one of my more eventful journeys and maybe next time I’m at the bus station I’ll ask, “will the journey be by bus or bicycle?”