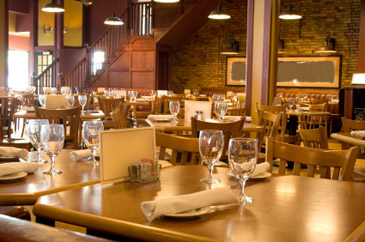 I had dinner with one of my college professors while I was studying at the University of North Carolina at Charlotte. Now, I know what you might be thinking and, no, there were no candles, no footsie under the table, no raunchy taboo love-making back at her two-car, leafy suburban home and she certainly wasn’t going to enjoy my mystery-stained mattress in campus accommodation. I was a guest at her family dinner at a place called “The Big Ben Restaurant“, which was so English even I, a full-blooded Englishman who aspires to kill a Frenchman with a longbow, didn’t know a few things on the menu – if anyone knows what a Wally is, please let me know and put me out of my ignorance.

I’d gotten to know this professor, we’ll call her Carolyn, over the course of the semester as I was the only exchange student in that class and I seemed to be one of the few people who was actually taking that prerequisite English class seriously. Almost everyone else was just there because they had to be. To be fair, if someone shoved me in a Chem 101 class when I was studying English Literature, I probably would have struggled to give it my full attention too. Plus I was in my second year of a creative writing degree so if I’d managed to put words in worse order together than some students what were studying to be become engineers I would’ve felt embarrassed.

Even despite my accent and academic effort, it’s still quite surprising I got close enough to my professor for her to invite me to her family dinner. Back home at Kingston University, where I spent two years, I’m still not sure a single lecturer would look at me now and be able to remember my name. I was entirely forgettable to them, and they to me.

At six p.m. I left my room, cheerily told my American house-mates, “right guys, I’m going for dinner with my professor. Don’t wait up,” then headed to the Student Union building with their confused-but-jealous faces watching me leave. My professor pulled up in her Chrysler a few minutes late and waved me over.

She drove me off campus, which was always an exciting event for my vehicle-less exchange student self – I was at my housemate’s mercy when it came to Walmart trips for groceries. That was why I had to let him win at midnight Black Ops sessions on his Xbox.

My professor took me off campus and showed me some parts of Charlotte I’d not seen before, and gave me some context, none of which I knew before, then we headed to her two-car leafy suburban home (that part was true). I met her husband and her ten-year-old daughter and played with her dog in the garden. Then we walked to the restaurant.

An Englishman, an Irishman and a Scotsman walked into a bar…and they all got along just fine, was how the evening turned out. There was about a dozen of us I think, with someone else’s adult children arriving later. I forget the details but as far as a I recall, nothing even remotely amusing happened. At one point someone did brush my foot, but I think that was an accident.

It was a pleasant meal in good company away from my flat-mates and other students. I was on the inside, if only for a night. The life of a professor does seem comfortable, that’s for sure. The bathroom at her house actually smelt of something nice, lavender picked in Norfolk at the end of August if my nose wasn’t mistaken. You can’t say the same about any student bathroom, where you’re lucky if the place only smells of shit.

But at the end of the evening that’s where I found myself, back in reality, in my small student accommodation with bare walls and no mementos or memories anywhere in the room, and facing the teasing questions of my flat-mates. “So, what happened?!”