There’s a place called Huck Finn’s in the French Quarter of New Orleans. I went there a few times while I was in “The Big Easy” as they call it. First time I sat at the bar with a drunk ex-Marine called Joe who showed me his gun. Cool guy. Slightly terrifying, but cool nonetheless. Second time was this potential wank session I’m talking about.

I was standing outside waiting for the fake-smile pretty young waitress to come show me to a table. She came over, looked at me, and said, “Table for two?”

There was an old guy standing behind me. I guess she thought he was grooming me; evidently that’s a more common occurrence than young people coming in to eat alone. 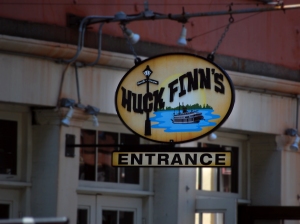 She shrugged and took me to the mandatory table in the corner. At least it was by the window which meant that people inside the restaurant AND the folks idling past outside could judge me.

I watched the other couples and groups of friends. There was the Scandinavian foursome who might’ve been friends but were probably in an open relationship with each other and would go back to the hotel and have aggressive sex in a merry-go-round formation. We all know what those Swedes are like. Then there was an elderly couple on the table next to mine; at first I couldn’t tell their nationality but after they didn’t say a word to each other for twenty-six minutes only to both thank the waitress politely when she took their plates away I decided they were English.

On the table in front of me, which I could see because the chair opposite me was horribly empty, was a young American couple. They must’ve been mid-twenties, only slightly older than I was. They just sounded happy. Laughing and joking and I could even hear their smiles when she asked him, “Dessert?” I wanted to stick my fork in her neck. I wasn’t acting the bitter old man, not much; I was just jealous.

See, New Orleans was the first time I’d felt lonely in a while. I had learnt to enjoy eating alone in restaurants, and mixing with the other freaks in McDonald’s is a delight I’ve never tired of – no joke, I once listened to a middle-aged man with a scruffy grey beard recite poetry while poking about in his Big Mac. But something about the sweaty narrow streets of New Orleans bummed me out. For the first time, travelling or not, I felt something missing in my life.

I ate my alligator po-boy in Huck Finn’s (not the cheapest thing on the menu but hey, alligator!), while watching the other people with their friends, companions and lovers. And I tried to take comfort in the fact that I looked like a guy who sits in restaurants like these and masturbates under the table when nobody’s looking. I smiled.

Come on guys, ‘fess up. Anyone else feel like me? Or does anyone want to admit that they’ve actually masturbated in a restaurant? Your secret’s safe with me!